Christian Lund and Catherine Boone (eds), AFRICA vol. 83, no. 1, 2013
Land issues are not only about land. Rather, they invoke questions of property more broadly, implicating social and political relationships in the widest sense. Struggles over property may therefore be as much about the scope and structure of authority as about access to resources, with land claims being bound up with questions of authority, citizenship and the politics of jurisdiction. This collection investigates the relationships between property, citizenship and political institutions, and how each of these plays a role in constituting the others. This seems especially relevant in the light of the many efforts at land tenure reform that tend to assume the separate and settled existence of property, of citizenship, and of the state. We consider none of these socio-political features as separate or pre-established facts. Rather, land politics involves dynamic claims whose success and materialization depend upon the power relations among social groups and actors wielding different forms of institutional authority over land. 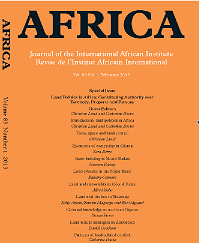