Money is the True Friend: Economic Practice, Morality and Trust Among the Iganga Maize Traders in Uganda

The Ugandan economy was once solidly based on the export of cash crops such as coffee and cotton. The economic crisis and the civil war in the 1970s and 1980s however profoundly changed the agricultural economy, and marketing of traditional cash crops was replaced by marketing of commercialized food crops. “Money is the true friend” deals with the emergence of de-regulated food markets for maize in Eastern Uganda. The focus is not marketing as such, but rather a new social and economic field for local traders demarcated by the involvement in three maize markets: the relief market, the Kenyan market and the domestic market. The central problem illuminated in the book is the relationship between the liberalization of food marketing and the development of a new social and cultural practice – a morality – for trading which is both shaped by and shapes the marketing opportunities for the participating traders. 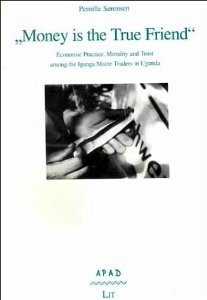